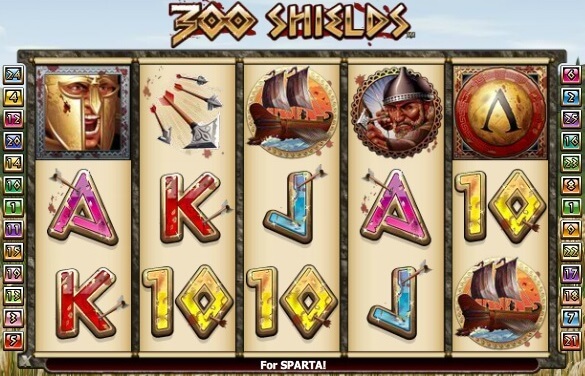 The 300 Shields slot game is a creation of Next Gen. It features a theme that borrows rather liberally from the film 300, depicting a group of unrealistically muscled soldiers involved in swords and shields combat. The graphics are well done, however, and the gruesome animations exceptionally detailed, making the game worth a look, even if the player will constantly be comparing it to the epic film.

It’s not clear what exactly the soldiers are fighting about, but they seem to be doing a good job. The wild symbol of the game, depicting a soldier charging into battle, animates, showing the soldier lashing out with his sword. The result is a splash of blood and gruesome sound effect. If anything can be said for the game, the graphics and visuals do an excellent job capturing the spirit of the 300 film. But slot games aren’t all about the visual presentation. How does the game itself play out?

Beneath the swords, blood and battle cries the 300 Shields slot game uses a 5 reel, 25 betting line system. There is nothing unusual about the game in this regard, and players are encouraged to adjust the betting lines up or down, as they see fit. Where the game really gets interesting is during the bonus mini-game, which offers blood and cash in equal amounts. Let’s have a look.

If the player manages to match 3 or more shield icons in the 300 Shields slot game, the mini-game will be triggered. 10 free spins will be granted, which will begin to play out in the usual fashion. During free spins, however, if more shield icons match they will add to a multiplier, and grant more free spins. Multipliers, of course, determine the value of each win, and how money times the cash will be multiplied. Shield icons may keep matching during the free spins up to a total of 300. This means that it is possible for wins to pay out 300 times more then they usually would. These kinds of winnings are enough to make anyone let out a few battle cries.

During the standard play portion of the 300 Shields slot game the player will be paying more attention to the basic symbols. The first to look out for is the archer; the man standing with his bow drawn, ready to let an arrow go flying off into battle. He is the most valuable standard symbol of the game, and pays out an excellent amount if matched the maximum of five times.

The other picture symbols include a warship, sword, and flying arrows. These symbols are worth a great deal less then the archer, but should still make the player smile if matching five times. Lastly come the playing card symbols, which are perhaps a touch uncreative, especially considering the rest of the game. One will notice, however, that it seems the playing card numbers and the archer got into a bit of a disagreement. The playing card numbers pay out only a small amount upon being matched, and wont be worth writing home about.