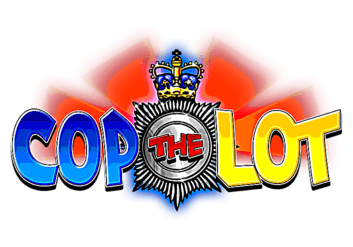 Cop The Lot is an online progressive jackpot slot from International Gaming Technology (IGT). The game not surprisingly has a cops n robbers theme, complete with bumbling crooks and hapless coppers. The game features twenty paylines and five reels and a take it or leave it style Free Spins Bonus. In Cop The Lot you will have to avoid the policemen who are after you to arrest you. The game carries on until you get caught. Once caught, the player will then receive their verdict, which is one of four. But more on that later.

As mentioned, Cop The Lot has a lovely cartoony feel to it. The colours are bright, and the symbols shown off against a Police Blue background with a wire fence surrounding the reels giving the impression of a prison. Like in many machines at the sites added for mobile, the most prolific symbols on the game are the ones taken from the deck of cards. These are large, bright, bold and made of bubble writing.

The rest of the symbols are either the robbers themselves or the slightly idiotic policemen. All but one of the robbers are wearing the traditional striped prison shirt, with the last happy to wear just a pair of braces. Each robber is larger than the other, with the last one looking like he ate all the pies in prison. The last symbol is the slightly silly looking copper.

The slot has a delightfully busy feel, with lovely animated robbers running away from a silly cop, all put to a background of music from a 1980’s cop show called The Professionals. Added to this is the sound of the reels, bombs, whistles and various other cops n robbers related noises.

The wild symbol featuring dynamite is the top paying one, should you get five of them in a row. This wild symbol can also substitute for any other symbol except for the bonus ones and any win made using the wild symbol will be doubled. The title symbol is the next best in the game, followed by the cash stacks and the money bags.

Cop The Lot features three distinct bonus rounds. The first, Smash n Grab is activated by the Safe symbol. Here a player will choose a safe and then two others that are now eliminated. Once this has happened a number of spins will be offered, Deal or No Deal style, or the player can simply continue. During this feature you will get a maximum of fifty free spins, and you will find extra wilds and bonuses too.

The second feature is called The Usual Suspects. This will take a player to a screen showing our four robbers. Simply picking one will reward you a certain amount of cash. The maximum win size on this feature is 500 times your total bet size.

The final Feature is called Cops n Robbers, and takes the player to a board game style round where they will travel around the board collecting cash and key symbols, all the while outrunning the cop. During this round you can also enter Millionaires Row, by finding three keys. However, should you get caught by the cop you will go to jail and end up with one of four verdicts which end the game.