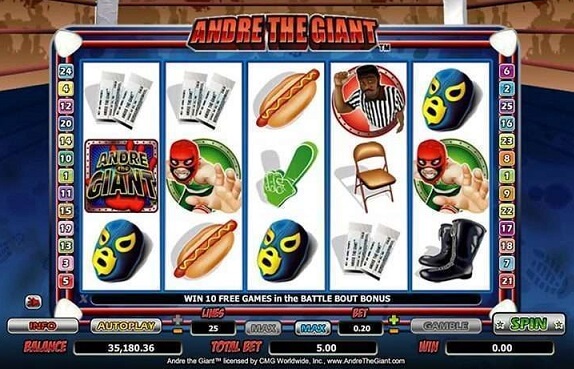 Look at the historical books of famous wrestlers and Andre the Giant will feature as a legend. The enormous man, known for towering above the rest of humanity, tore up the wrestling rings for years. Retired now, the man is still remember fondly for being the focus of many brutal wrestling matches. Today he is remembered for his contributions to wrestling in many ways, including the Andre the Giant slot game.

The Andre the Giant slot game focuses, as would be expected, and The Giant himself. Make use of a stacked wild symbol and Andres will burst through the reels, delivering a solid kick to the face of the player. Activate the bonus game and watch Andre destroy an opponent in animated action. Next Gen certainly went the whole nine yards when making this impressive slot game.

The theme of the game, other then Andre himself, seems to have been the experience of visiting a wrestling match. From hotdogs and show tickets to folding chairs and Styrofoam toys, everything wresting match related makes an appearance in the game. But how do the symbols shape up in terms of value to the player?

A mysterious masked wrestler is the most valuable symbol in the game. Wearing a lucho libre mask, this stringy character seems to be an enemy of Andre the Giant, and appears in the bonus mini-game, should the player manage to activate it. In the standard game, however, he will be a friend to the player, paying out a huge sum if matched the total of five times in the real money online slots.

The referee is also a valuable symbol, as well as the championship belt and the ring. But lets be honest, the player started playing this game to see Andre the Giant wrestle. So lets get to the real action already.

Andre the Giant acts as a wild symbol in the game, as has already been said, but how to get him really angry and going wild? The scatter symbol, appearing as the written words Andre the Giant, will trigger the bonus mini-game if matched three times. Upon the scatter symbol matching a second window will open.

Andre now faces off against his opponent, and the player gets to help out. The reels will spin, with wrestling moves hidden among the standard play symbols. If the wrestling moves match they will be added to the moves Andre may perform. When the sequence finishes all wrestling moves matched will be performed, animated for the delight of the player. Plus, each move that further destroys the opponent will add cash to the players wallet. Wrestling has never been so lucrative. To the spectator, at least.

But we all know Andre the Giant doesn’t leave the ring until his opponent has suffered complete defeat. If Andre does at least three moves, he will end the match with a finishing move. This move is not only impressive to see, but will also result in an enormous jackpot payout. If Andre does less then three moves, however, the match will end early with no climax. How disappointing. Best aim for the three moves and finisher combo.